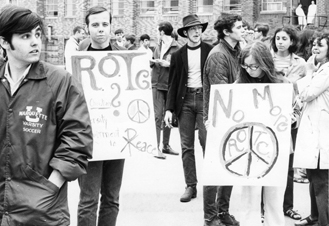 Marquette students had little history of political protest before 1960, but that changed in the following decades, with students taking up a wide variety of causes. Protests at Marquette were less violent than those on other campuses, but they did force university officials to re-evaluate policies and their relationship with students in their care. As campus events developed quickly and organizations grew up overnight, those interested in researching this topic will want to spend some time creating general timelines of events from the period (the Marquette Tribune is a useful source for this) and searching archival finding aids using a wide variety of keywords, including: protest, demonstration, power, SURE (Students United for Racial Equality), student rights and responsibilities, RESPOND, speakers policy, status and role of students, etc.

The Hilltop yearbooks (1915-1996) have been digitized and are available online. They contain photographs and other information documenting protests and activism on campus.  Use the “Advanced Search” feature to limit your search by date. Keep in mind that not all images are captioned, and it may worth your while to browse through specific volumes for images related to your topic.