Since 2017, the life, work, and legacy of Frederick Douglass has been celebrated every February 14 through a transcribe-a-thon, a crowd-sourced effort to translate physical records of Black history into readily accessible digital documents. Marquette has participated since 2019.

In 2019, the Marquette University Libraries and the Ott Memorial Writing Center collaborated on Marquette University's first Douglass Day transcribe-a-thon. These efforts were led by Dr. Lisa Lamson, who was at the time a doctoral candidate in history and a peer tutor at the Ott. 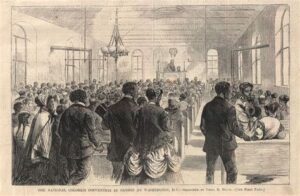 In 2022, the Douglass Day Transcribe-A-Thon features records from the Colored Conventions, a decades’ long nineteenth-century movement for Black civil rights.

The Colored Conventions reflect the long history of collective Black mobilization before, during, and long after the end of the Civil War. As empowering hubs of Black political thought and organizing, the Colored Conventions provided space for informed public audiences to develop political plans and community-building projects, celebrate racial unity and protest state violence, and work tirelessly to secure Black people’s civil rights.

Providing a powerful structure and platform for Black organizing, more than 200 state and national Colored Conventions were held between 1830 and the 1890s. Filling churches, city hall buildings, courthouses, lecture halls, and theaters, the well-attended Colored Conventions illustrate the diversity of cultural life and political thought among Black communities and their leaders. The meetings included the most prominent writers, organizers, church leaders, newspaper editors, educators, and entrepreneurs in the canon of early African American leadership—and tens of thousands more whose names went unrecorded. While most delegates were male, Black women participated through their newspaper work, entrepreneurial activism, political commitments, and especially their presence. They embodied the movement’s core values and challenged traditional beliefs about women’s place in public society. (From the Colored Conventions Project)

To contribute to this year’s efforts from wherever you are, pull up a computer, turn on the Internet, and follow the instructions below!